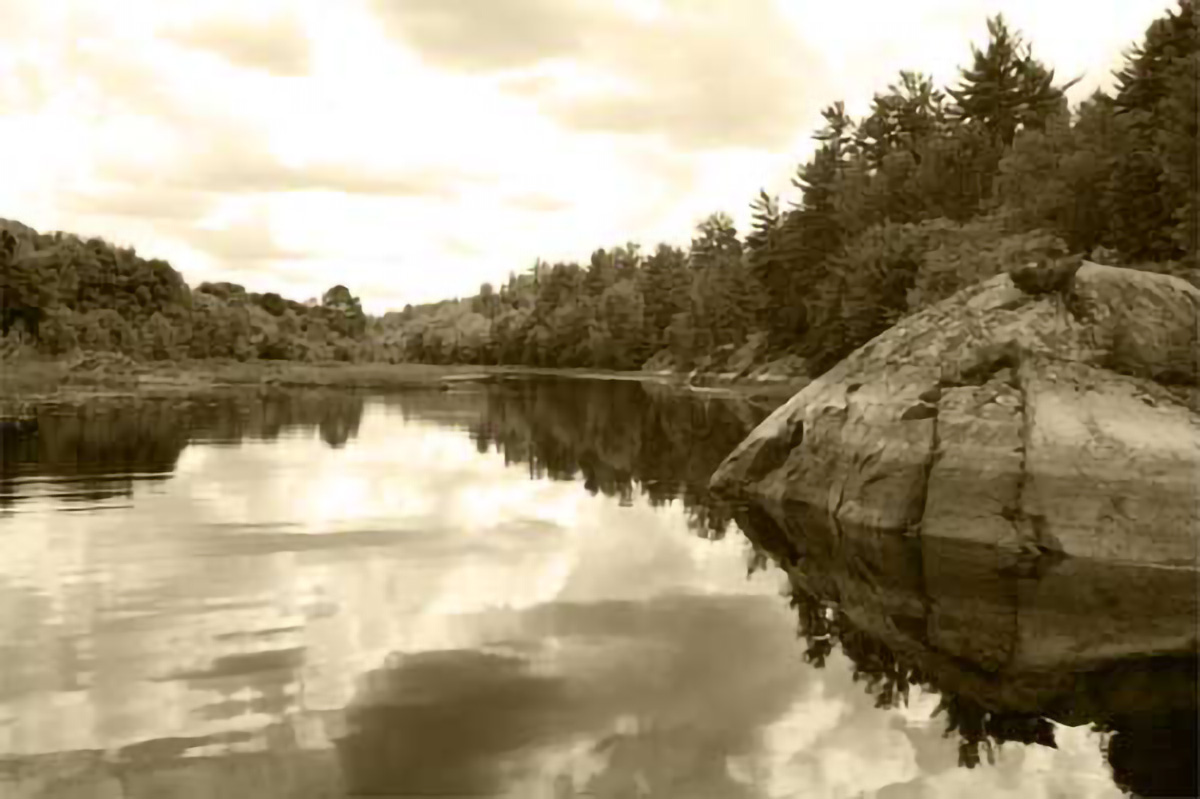 on the French River

12,000 years ago the site where Wolseley Lodge now stands was covered by ice almost 4 km (3 miles) thick. The immense weight of the ice depressed the land so much that when the ice finally melted about 10,000 years ago the French River actually flowed in the opposite direction that it does today. For a brief time the water from Lake Huron and Georgian Bay drained eastward along the French River valley into the Ottawa River watershed. Through a process called isostatic rebound the land eventually rose to its present height and the French River reversed the direction of flow. It now drains Lake Nipissing westward into Georgian Bay. The French River is relatively short for a major river, it is only 110 km (68 miles) long, and drops a little more than 18 m (60 feet) in elevation
between its head at Lake Nipissing and its mouth at Georgian Bay. The river is known for its unspoiled picturesque shoreline, many weedy bays, numerous rocky shoals, and its variable depth (it is more than more 36 m deep, or 120 feet, in some of the larger basins). As the saying goes, still water runs deep, and the French River in the Wolseley Bay area is indeed a mighty river. The seasonal flow is quite variable, averaging 340 m 3 /sec (89,770 US gallons/sec), which is about 10% of the volume of water that flows over Niagara Falls, and the water level fluctuates up to 2 m (6 feet) during the boating season.

The Ojibwa were the first people to live in the French River area, arriving about 6,000 years ago. The watershed was a diverse and rich hunting and fishing environment and the river was a major First Nations travel way. In 1610 Etienne Brule was the first European explorer to travel the French River. The river was the main transportation route between Montreal and Lake Superior for French and English fur traders for more than a century between 1700 and the early 1800s. From the late 1800s to the early 1900s the French River basin was a major source of red pine and white pine timber. Much of the timber used to rebuild
Chicago after the great Chicago fire of 1871 came from the French River area. Like many northern Ontario lakes and rivers, the water in Wolseley Bay and the French River tends to be moderately dark stained due to naturally occurring dissolved organic carbon. The Secchi Disk reading in mid-bay averages 3.3 m (10 feet), meaning you can see down into the water column more than 3 m before a light-coloured object is lost from view. It is well oxygenated and has a moderate nutrient loading, averaging 11.8 ug/L of total phosphorus during the open water season. This classifies Wolseley Bay as mesotrophic. Mesotrophic water systems typically have high biomass production and high biodiversity.

Wolseley Bay and the upper part of the French River are in Fisheries Management Zone 11. Progressive fishing regulations specific to the French River have enhanced fish populations, particularly for walleye, pike and muskie. Slot sizes restrict harvest for these three fish species. No walleye between 43–60 cm (17–24 inches) can be kept and only one fish greater than 60 cm (24 inches) can be taken. For pike the slot size in which no fish can be taken is 53-86 cm (21-34 inches) and only one fish greater than 86 cm (34 inches) can be kept. Muskie is even more selective: one fish only and it has to be greater than 122 cm (48 inches). But seriously, what are you going to do with a giant dead muskie? They’re not very good eating, and big muskie are very rare. A 122 cm muskie is probably more than 20 years old and represents less than 1% of the sexually mature spawning population. They are the apex predators, the top of the aquatic food chain. Every muskie deserves your respect. Consider practicing catch, photograph and release for all muskie. The French River is recognized as 0ne of five water systems in Canada likely to hold world record-sized muskie.

The most recent science is conclusive about mature sports fish of all species: the biggest fish produce the highest quality and the largest number of eggs. Therefore, without question big fish are the best spawners and contribute a higher proportion of quality offspring. Think about it. Big fish got big because they out-lived their competitors, they are an example of successful natural selection, survival of the fittest. These are the fish we want contributing to the future gene pool. So next time you catch a particularly large fish of any species remember that you are holding in your hands potentially hundreds or even thousands of genetically superior future offspring. Do your part in protecting a healthy and sustainable sports fishery in Wolseley Bay and the French River. When you catch a big fish take a good picture and gently release it, put the memory of the fish on the wall instead of putting the fish on the dinner table. Endless hours of fishing opportunities on the French River’s many bays, weed beds and rocky shoals.

Fish of the French River Wolseley Lodge (46 o 6.341’ N 80 o 15.968’ W) is located at the mouth of the Wolseley River where it enters the west end of Wolseley Bay on the French River. The Wolseley Bay area of the French River is contained upstream by the Fiver Fingers Rapids, the Chaudiere Channel, the Portage Channel and the Restoule River, and downstream by Cedar Rapids, Little Pine Rapids and Rainy Rapids. The stretch of water that is safely navigable by motor boat and accessible from Wolseley Lodge, is more than 25 km (15 miles) long, has about 220 km (136 miles) of shoreline, there are 77 islands greater than 1/3 ac in size, and there are innumerable weed beds and rocky shoals. It has approximately 2,300 ha (5,680 acres, or more than 8½ square miles) of open water to fish and explore, and in some places it is over 36 m (120 ft) deep.

Francois Dambremont settled in the Noelville area in the late 1800s. To supplement his income he built a cabin at the present site of Wolseley Lodge and started a trapline. Always the entrepreneur, Francois expanded his cabin into a two story 8 bedroom building to accommodate workers at a nearby sawmill. As the local lumber industry began to wind down in the early 1920s the sawmill workers were replaced by fishermen, hunters and tourists seeking a wilderness experience. Francois died in 1928 and his son Oscar Dambremont took over the property, running it as a tourist and fishing camp, and Wolseley
Lodge was established.

Oscar met and married Janet and the couple managed Wolseley Lodge until 1949. At first the fishery seemed inexhaustible; The Wolseley Bay area of the French River gained a reputation for big fish, and lots of them. However with First Nations, sawmill workers and local residents fishing for sustenance and an increasing number of tourists fishing for sport with no thought of conservation, the pressure was unsustainable. By the late 1930s a well- known local guide and camp owner named Raymond Cray exclaimed “when we first came here we could go out for an hour and get enough fish to last for three days, now it takes three days to catch enough fish for one meal”. Every ecosystem, regardless of its productivity, has its limits. By the 1940s the Wolseley Bay area of the French River was another victim of overexploitation and disregard for common sense fisheries management.

Slowly, over the subsequent decades, fishing pressure diminished and attitudes changed. The introduction of possession limits, slot sizes, closed seasons to protect spawning fish and a general appreciation for the importance of a healthy and sustainable fishery gave the resource an opportunity to recover and once again the Wolseley Bay area of the French River is a renown, premier fishing destination.

In its early days Wolseley Lodge was host to weekly ballroom dances and local and regional bands. In the spring of 1980, just before the start of the fishing season, both the ballroom and the main lodge building were lost in a fire, so the dances and band music are now part of the local cultural history. However, Wolseley Lodge always was, and remains, a popular destination for artists, photographers, historians, vacationers and outdoor enthusiasts seeking a place to relax and experience the natural splendor and the unspoiled wilderness of the French River. Like many northern Ontario resorts, Wolseley Lodge has changed ownership many times over the decades. After Oscar and Janet there was Nancy and Ernie who owned it through the 1980s and Jules and Nicole through the 1990s.

Over the years Wolseley Lodge grew to its present configuration. Currently there are 16 private cabins plus the main lodge, office, restaurant and marina. Many of the cabins have maintained their original rustic log cabin structure and appearance. A well-equipped marina, sandy beach, children’s play area, extensive dock, fish cleaning hut, a fleet of fishing boats, pontoon boats and canoes complete the Lodge’s current infrastructure.

On Canada Day, July 1, 2004 Harald and Ingrid Lutte took over ownership and management of Wolseley Lodge. Instead of enduring bumper to bumper traffic every day on the Autobahn and working in a sterile urban office in their native Germany Harald and Ingrid decided a change of life style was in order. If you have to work for a living (don’t we all?) they decided they would rather work in a beautiful and natural environment. At first being self-employed and running a lodge was more work than they anticipated, but Harald and Ingrid were up to the challenge. They were encouraged by the positive response from guests and local residents. The new owners were quick to begin a series of improvements to the Lodge’s infrastructure. The cabin’s kitchens and water systems were modernized to make them more comfortable and enhance environmental efficiencies, while maintaining the original log cabin look and feel. The marina, fish cleaning hut and the dock systems were either rebuilt or reorganized to improve safety, enhance serviceability and reduce the environmental impact. The beach area was made more child-friendly so families had more recreational options. Seasonal flowers and landscaping added colour and a pleasing visual texture to the grounds around the Lodge.

Through these many improvements Harald and Ingrid Lutte have demonstrated their commitment to providing an excellent vacation and recreational experience for their many guests through the years, and they have ensured that Wolseley Lodge makes a significant contribution to the local economic vitality. Perhaps most importantly, through their many efforts to enhance the environmental integrity of the Lodge and the marina they have made a measurable contribution to protecting Wolseley Bay water quality and the health, productivity and sustainability of the French River fishery. Congratulations to Harald and Ingrid and Wolseley Lodge on 90 years of continuous operation. Harald and Ingrid Lutte, 0wners and operators of Wolseley Lodge since July 1, 2004. 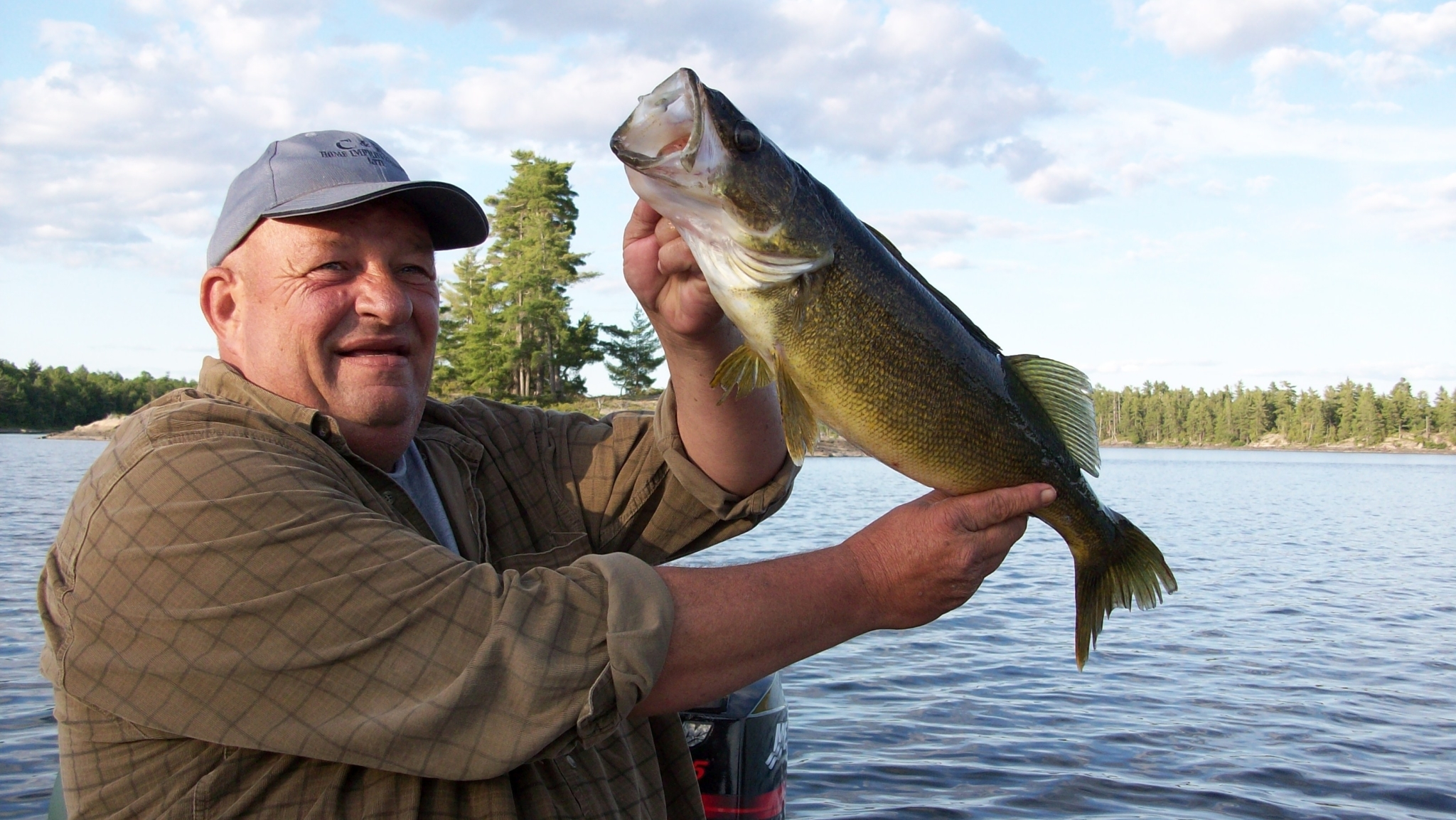